Launchers are apps that customize the home screens of smartphones. Launcher apps can be used on Android OS, which is highly customizable. By switching the default launchers to a launcher app, you can greatly change the designs and the usability of your home screen.

The customization materials used in”CocoPPa Launcher”are provided from designers from all over the world. Also, it utilizes the abundant items (930K icons and 190K wallpapers) created and shared by users in “CocoPPa”, a customization app which has over 32 million downloads. Also, we focused on the usability and the app is easy to use. We recommend our app to anyone who loves home screen customization. 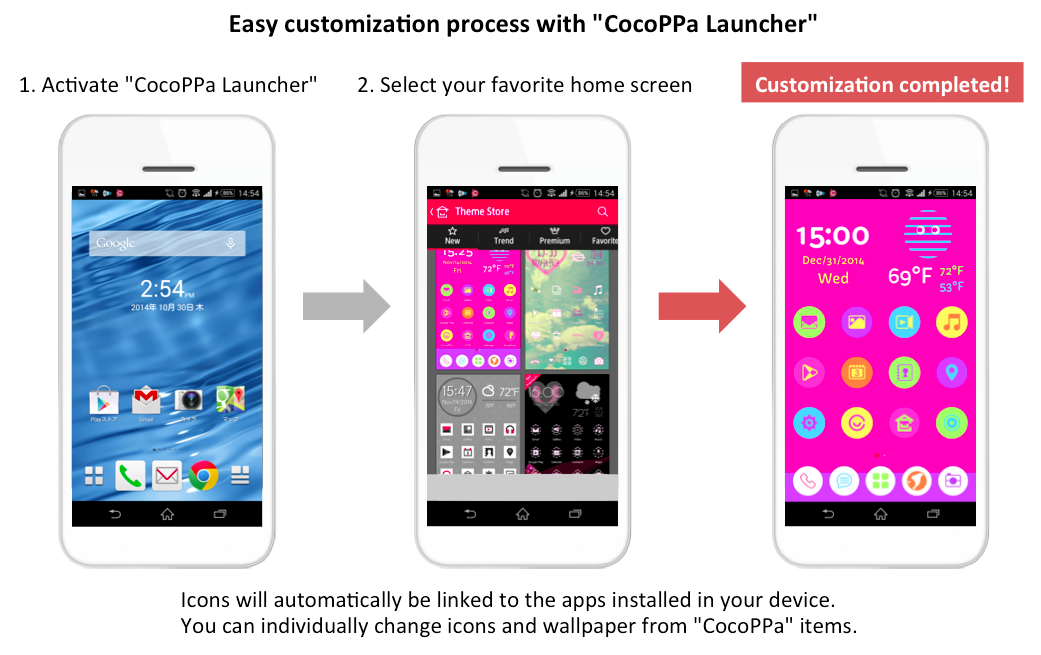 “CocoPPa Launcher” has expanded its customization area vastly by enabling users to change “widgets” “usability” “visual effects” in addition to the “icons” and “wallpapers” that you could change through “CocoPPa”. Also, we have prepared many “themes” (home screen customization units that include wallpaper, icons and widgets). 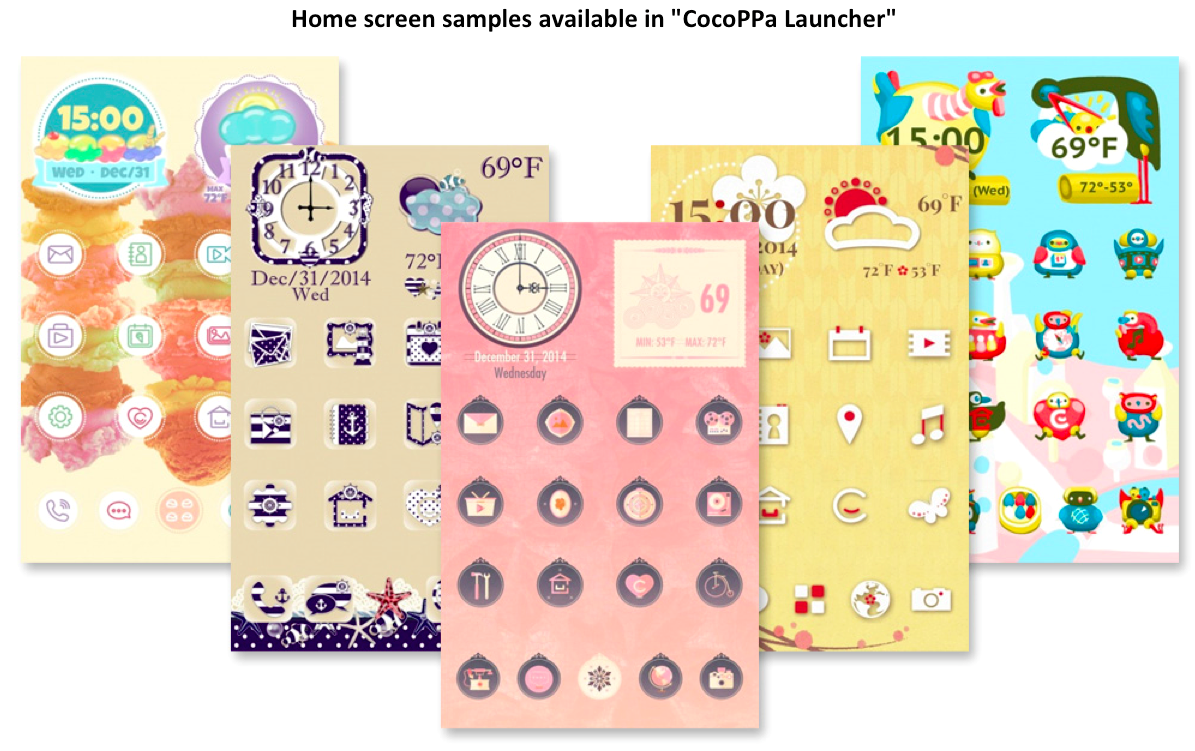 Users can use over 1 million items from “CocoPPa”. It is easier to customize by using both “CocoPPa” and “CocoPPa Launcher”. We will further strengthen the relationship between the two apps to improve usability.

Themes are created by designers from all over the world. It is very unique that you can change the design of clock / weather / search / battery widgets.

You will not need any extra downloads you see with other launcher apps.

While UNITED will constantly develop “CocoPPa” as a community service for its users exchanging their products, it will raise “CocoPPa Launcher” as a core app among a CocoPPa app lineup.

UNITED will aim for a position as a provider of a smartphone portal for women who like their smartphone customization with spread of “CocoPPa Launcher” in a global Android OS market.  In addition, UNITED will aim for large scale growth of “CocoPPa Launcher,” cooperating with, and navigating its users to, our other various apps for women including “CocoPPa” and our avator game app “CocoPPa Play.”

Further, in the development of “CocoPPa Launcher,” in aiming for a high standard of service in terms of linkage with “CocoPPa,” comfortable usability, future service expandability, and so forth, UNITED has selected SS Digital Media, LLC (Headquarters: California, U.S.A.; CEO: Ashvin Dhingra; hereinafter “SSDM”), the provider of “Themer,”1 a home app already receiving acclaim from all quarters, as a partner for the technical aspects. UNITED has invested funds2 through its 100%-owned subsidiary company CocoPPa, Inc. (Headquarters: California, U.S.A.; CEO: Naka Imuta)  A joint team of the three companies is conducting development of “CocoPPa Launcher.”

1. “Themer” is a launcher app developed by SSDM. It was released in November of 2013, and has exceeded 3 million downloads (as of October 2014). The total number of home screen material downloads since the app’s release has exceeded 12.5 million. It features functional characteristics such as the ability to change home screens with one touch (additional downloads for themes and widgets are unnecessary), and has been covered in media including The New York Times, CNET, Wired, TechCrunch, and Lifehacker as a superior home app with beautiful design.

CocoPPa is an app that allows users to customize their smartphone home screens to their liking using the available icons and wallpapers. Anyone can become a creator, posting illustrations as icons and wallpapers, and vibrant communication that transcends national borders takes place between users through message boards for each type of posted material.

CocoPPa is a global home screen customization community with over 30 million total downloads, with 85% of downloads from outside of Japan. 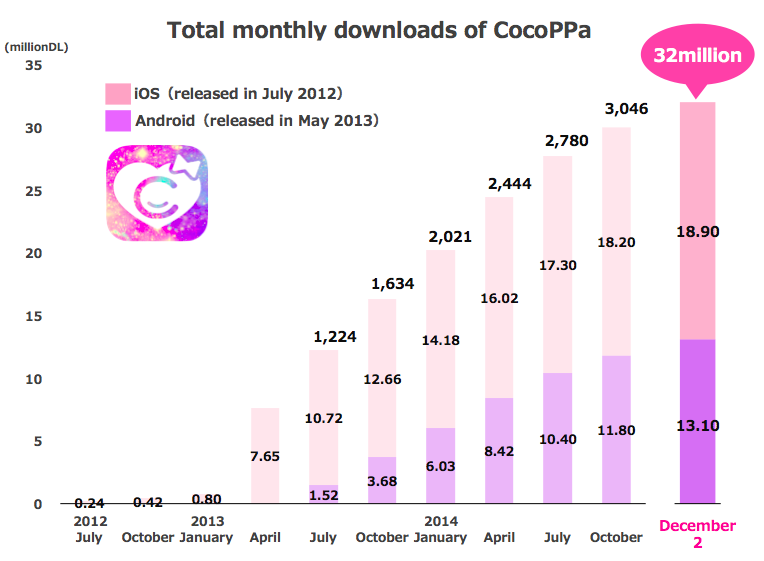 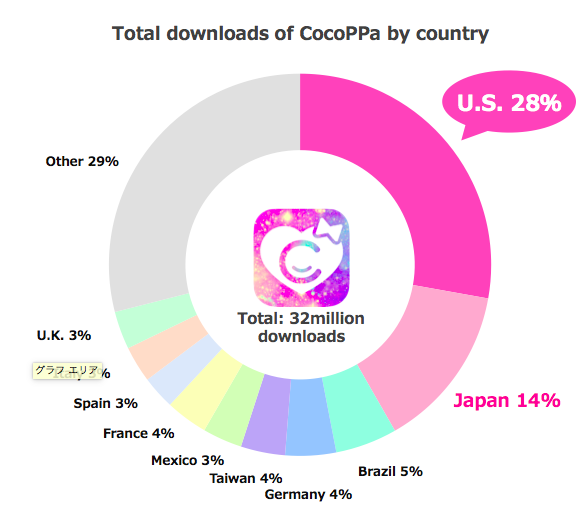